A client wants to select his own photography for a project and sends over a number of awesome images. But the images are low resolution. Assuming a professional photographer has been hired, I email the client requesting he send over higher resolution files. Then comes his response.

“Oh, I just pulled those from a Google search.”

That’s when I get that little twitch spurred by a mix of disbelief and frustration. I want to ring him up and shout, “Dude! That’s illegal, unethical, and just plain daft.” But since clients don’t appreciate being shouted at, I draft a polite email explaining that aside from the problem with low resolution there are copyright laws that prevent us from using those images and offer to search for appropriate images we can purchase from a stock photo website. I also add that if a stock photo can’t communicate what the client is trying to get across, we could recommend several photographers to take a custom image that the client would then own.

Most times this is enough of an explanation. But in the past I also have had clients suggest that as long as we give credit, the photographer will be fine. However, that’s also not true. Artists of every type expect and deserve to be compensated for their work.

There are also less clear violations of copyright we have to be wary of. I once had a boss that swore if you changed 5 or 6 elements in a photo it became a new work and copyright wasn’t an issue. Here are two examples of photography that were manipulated in similar fashion to what that boss suggested. In one case the defendant prevailed while in the other the original photographer had the upper hand and the case was settled out of court. Can you guess which one violated the copyright? 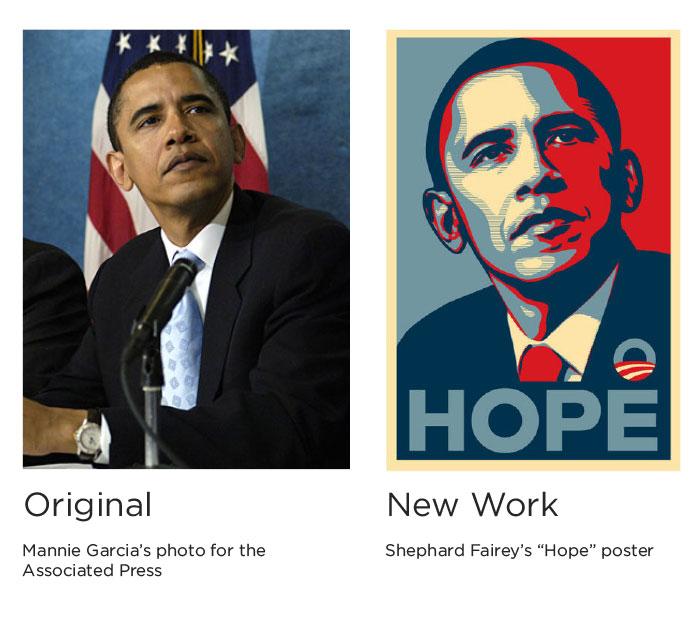 Seems my former boss was only half right. I actually can see both sides of the argument. Both Prince’s artistic manipulation of Cariou’s photo and Fairy’s illustration redux of Garcias photo transformed the original images. Against all hope, it was only Fairey who ended up paying.

In any case when working with clients we like to be sure to only use original images and illustrations.