I have a confession to make: I absolutely, positively adore Taylor Swift. 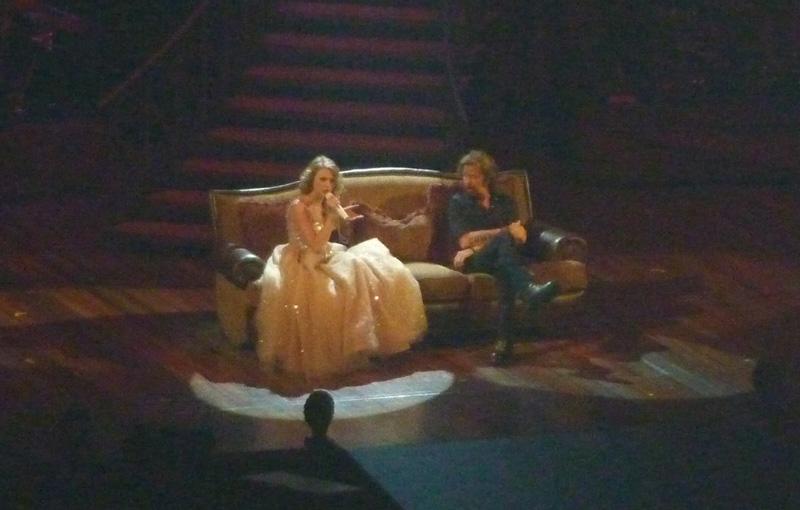 My love for Swift goes beyond her songs (which is good, with her recent conversion to all pop music), and focuses heavily on her marketing genius. Make no mistake about it: she’s better at marketing than you and me. And here are seven reasons why (click on the TSwift Takeaways to tweet your favorites).

The first several times I heard the song, I would say out loud, to my empty office, “Of course you hope we think of you when we hear Tim McGraw! Having your name associated with an established, attractive country musician is a dream come true for any up and comer! Not very subtle.”

At the time, I was annoyed by this approach; but credit where credit is due, it was clearly brilliant.

“Tim McGraw” did not make it to #1 on Billboard charts; it topped out at #6. But when “Our Song”, released a few months later, hit #1, it was evident Swift knew what she was doing. By releasing “Tim McGraw” first (and hearing it a ridiculous number of times, I might add) we did think of her when we heard Tim McGraw.

TSwift Takeaway:
Working with, or connecting yourself to, already established brands can help you gain notoriety faster.

When Swift got ready to release her sophomore album, Fearless, she offered the opportunity for her fans to be part of a mosaic that she would post on her website AND that would be included in the album. So how did fans get to have their photo in the mosaic? By pre-ordering the album – with a $40 price tag – they were guaranteed a spot.

Fans paid double the price they normally would have for her album for their chance to get in a mosaic in her album. Not a bad deal – for Swift.

In addition to the sales, the mosaic could be seen – and searched to make the images larger – on her new website, which she launched with the CD. Teenage girls around the world directed their friends and family to see their photo on the mosaic. 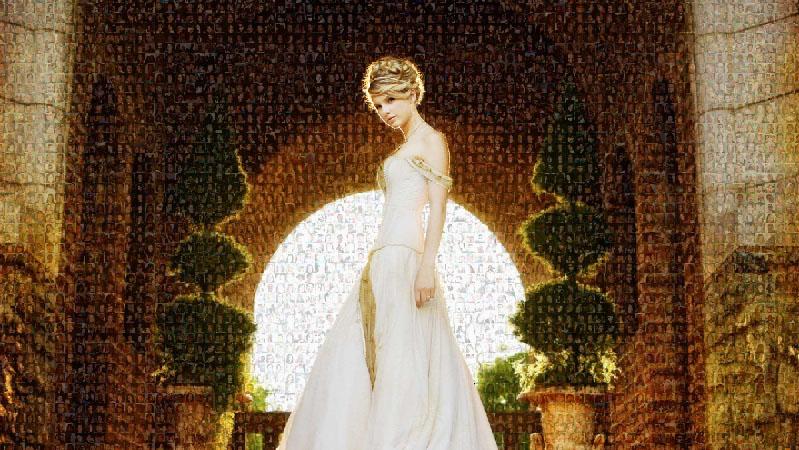 The image above is too small to see it, but if you happen to have the full-size copy lying around your house, yours truly’s photo is in the mosaic. Look for the girl in her mid-20s among a lot of 10-13 year olds. (For the record: I didn’t pre-order the album: my local radio station at the time did a pre-order contest, which I won.)

TSwift Takeaway:
Making offers exclusive to a small group makes them more attractive and people are willing to pay more when they are getting a little something extra. Making the “extra” something people want to share will create further reach.

3. Signing and Singing at the CMA’s

All Swifties know that 13 is Taylor Swift’s favorite number. So no one was surprised when she announced that she would sign autographs for 13 hours at the CMA’s in 2011. Before the day was over, she actually signed for 15 hours because after 13 hours there were still fans waiting in line, and she wouldn’t just walk away. Instead, she played an acoustic set to thank them for hanging out with her all day, and continued to sign, hug, and pose for photos, for another 2 hours.

I would be willing to bet that every single person in attendance that day would say they were a Taylor Swift fan for life. And fans for life buy concert tickets, cds, and more.

TSwift Takeaway:
Remember that as a company, you are targeting people. Sometimes saying thanks goes a long way and adds a human element to a brand.

Kevin McGuire is a cancer survivor who happens to love Taylor Swift. In June of 2012, he invited Taylor to his prom. His sister started the Facebook campaign, Taylor Swift go To Prom with Kevin McGuire.

Swift’s work schedule did not allow her to attend Kevin’s prom, but not only did she reply and tell Kevin this (which is huge!) she invited him to attend the ACM Awards as her date instead. When Kevin’s cancer relapse caused him to miss that year’s ACM Awards, she told him she would save his date for the following year. And made good on her promise by taking him and his family.

The Facebook campaign page has over 17,000 likes and countless articles were written about this date. Heart of gold? Marketing goddess? Maybe both.

TSwift Takeaway:
Monitor what people are saying about your brand online, always respond, and keep your promises.

To prep for the release of her upcoming album, 1989, Swift has invited fans to her home via social media to attend “secret sessions” in which they get to listen to the new songs before they are released, hear back stories on the songs (every Swifty knows that Swift writes her own songs – and there is always a back story), and take Polaroid images with Swift, her cats, and even her Grammy awards. Swift invites 89 (for 1989 – which is not only the name of the album, but the year Swift was born) fans to each Secret Session. 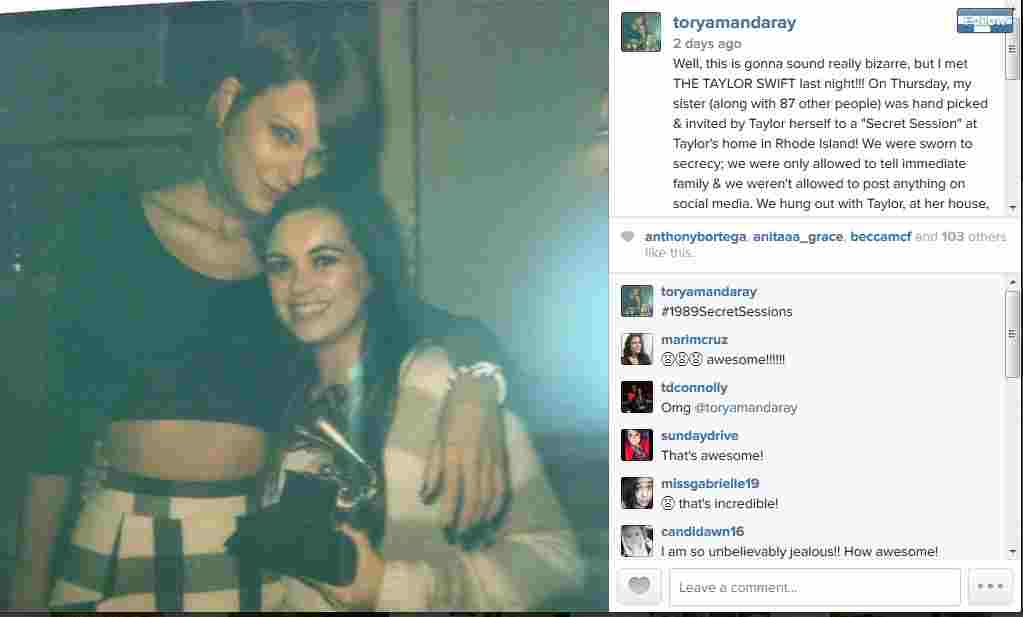 TSwift Takeaway:
Connect with your customers without trying to make a sale.

About a month ago, Swift reached out to a girl on Instagram who was being bullied at school. Swift replied to Hannah’s post with some heartfelt advice.

She could have provided a link to her latest single, Shake it Off, and Hannah would have been thrilled just to get a response from Taylor. The fact that she took it a step further and wrote a personalized note ratchets her up even further.

TSwift Takeaway:
While it may be tempting to simply link to a blog post or white paper you wrote, taking the time to provide someone with individual advice will be remembered – and makes a positive impact.

Taylor Swift replies to and manages (most of) her own social media. Everyone who has ever participated in a meet-and-greet with her says she gives them her undivided attention when it is their turn. She truly takes the time to connect. She writes her own songs – a lot of which are about her own life. It has become a game for Swifties and the media to figure out who each song is about. She sends personalized thank you cards out. In fact, when she was first getting started, she would bake cookies and create personal artwork for the radio stations that had her on for visits.

On her Red tour, she worked with Keds to put out a red line of shoes, she wore her signature red lipstick, and she worked hand-in-hand with Coke. She has been quoted as saying she will only endorse products in which she believes and personally uses.

She is her brand – with every photo of her cat, response to a sad girl, prom invitation, and contest, she is relatable and human to her fans. Swift knows her fans well, and knows that while traditional marketing would still sell her music, she’ll sell a lot more just being herself.

TSwift Takeaway:
As businesses grow, it can be difficult to remain connected with your customers. Do not let that be an excuse for losing sight of your original goals. Make the time to reach out – personally. 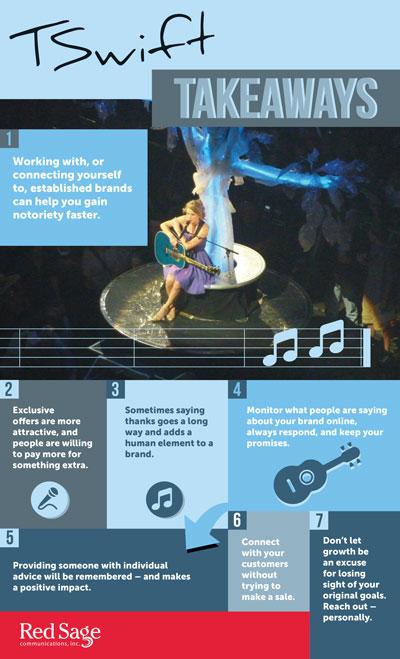